MentalUp’ is a company that produces personalized brain training games to support child development, improve intelligence and maintain mental fitness in everyday life. The startup was established in 2013 by two PhDs in computer science and educational systems. The company has over 2 million users and offer services in Turkey and the UK in collaboration with University College London. The impact investors see great potential in growing this company in LDCs, where public education is a critical issue. Doctorinemed is a startup that fights glaucoma. Established by three former employees of a global pharmaceutical company, it is working on eliminating the risk of blindness from glaucoma due to late diagnosis by providing an affordable and accessible option for visual perimeter tests. Glaucoma is the main cause of irreversible blindness; which will impact 76 million people in 2020, mostly in LDCs. As a progressive neurodegenerative disease, glaucoma needs to be diagnosed at early stage before vision loss grows further. To increase the early stage diagnose rate, making diagnosis tests accessible and affordable for mass screenings is crucial. The highest prevalence rate is in Africa (4.79% among those over 40). However, access to diagnostic tests is quite limited. This is both because of the costs of current visual perimeter devices (25,000 USD -30,000 USD) and also the physical conditions required for the device – which is not portable and requires a separate dark room and electrical power etc. – to operate. In order to address physical limitations, the company is developing a wearable (350gm-400gm) and portable visual perimeter device which also provides remote control over the collected data. Robosys & Solter is a startup established in Konya, a city of 2 million in Turkey’s agricultural industry heartland. It offers an integrated solution for agricultural corps quality. The company has two branches (a) a drone side, (b) image processing division. They build custom made drones for specific operational conditions, but also through their ‘KarbonDrone.com’ an e-commerce platform, they sell spare parts for drones and allow other manufactures share theirs on this website as well. These types of practical solutions are highly critical to survive in LDCs where access to materials could pose challenges to creating a support ecosystem for drone makers. In the company’s second branch, the image recognition and analysis section, they use multispectral cameras. For that they bought distribution channel rights from MicaSense, a globally known manufacturer in this domain, for Turkey. They developed ‘corps analysis software’ using MicaSense multispectral cameras. They also operate drones to offer services for large farmers. Robosys & Solter provides an excellent solution platform for agricultural settings with low transportation availability Kimlic is a blockchain-based decentralized identity validation structure. It is known as Know-Your-Customer (KYC) procedure for preventing money laundering and financing of terrorist activities. Kimlic Blockchain gives the user the ability to prove his/her identity to any business, without repeating the same processes. The company is located at Technopark Istanbul but has also its European base office in Tallinn, Estonia. 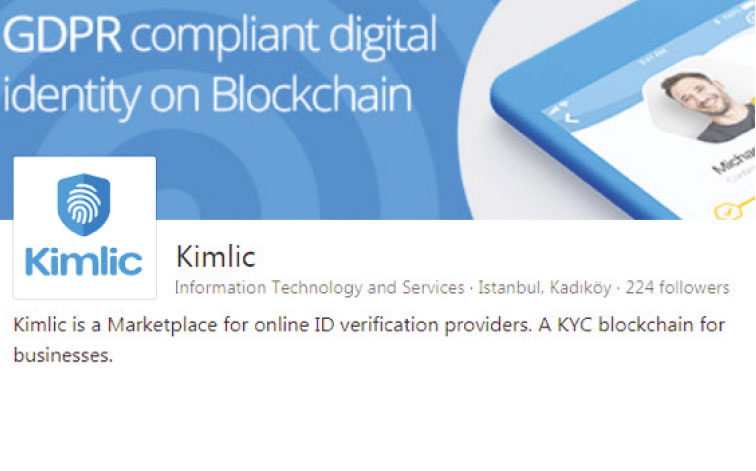